The latest builds of the Unscripted Extended Demo include a brand new minigame that challenges you to collect all of the coins and navigate to the exit with a series of commands, but did you know that you can take it up a notch and supercharge the minigame with Advanced Mode? Fear not; this devlog will show you some of the perks Advanced Mode has.

What even is advanced mode? 🤔

Advanced Mode is a special mode of the Unscripted minigame that lets you be more in creative in how you solve the puzzles by giving you the ability to write Python code that works with the game. You can take advantage of what Python has to offer with the official interface to access the minigame (API), Fira.

Awesome! How do I get started? 🤩 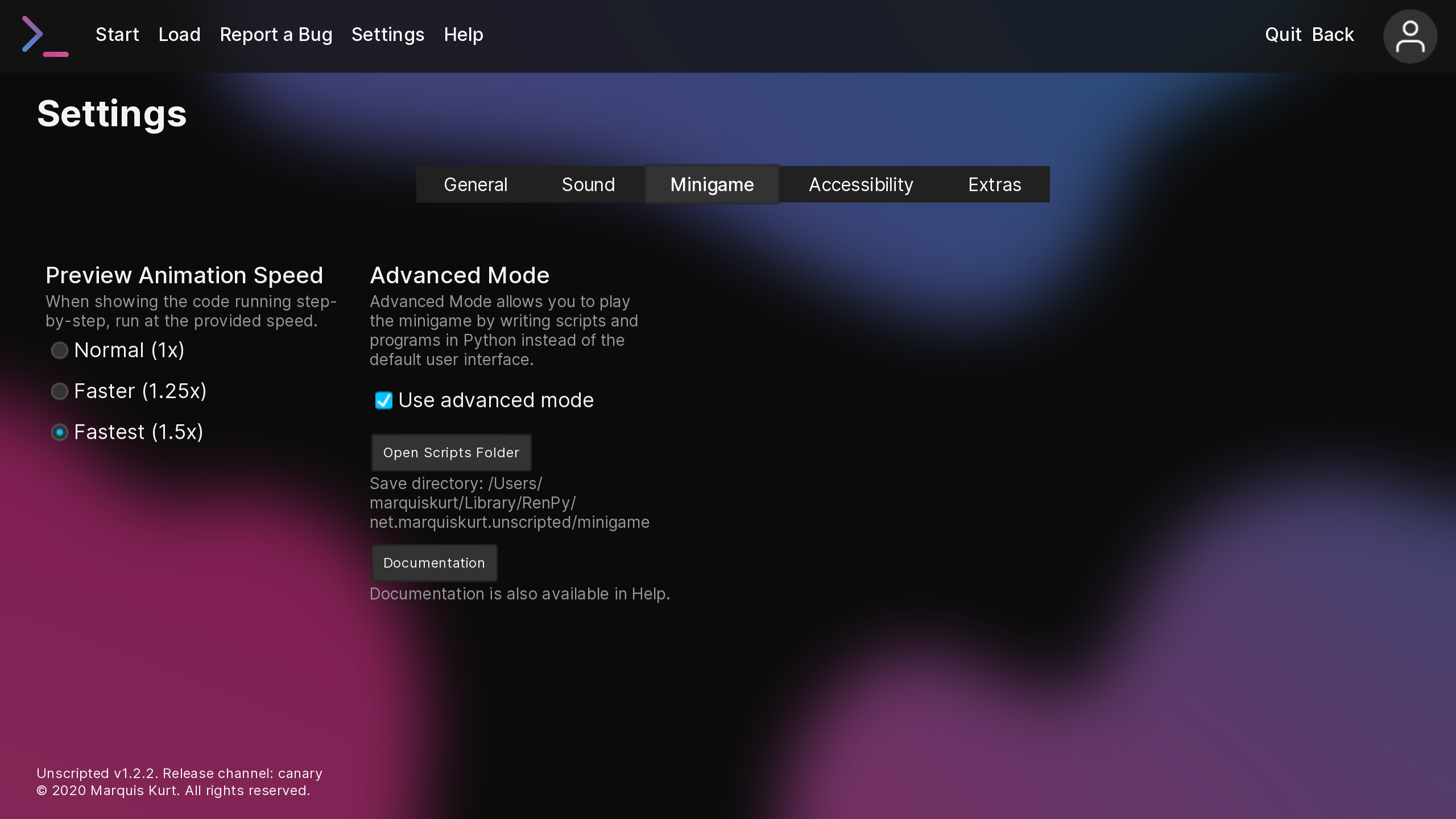 When a minigame level appears, instead of seeing the buttons to control Masti’s movements, you’ll see a bigger version of the world with buttons in the toolbar to open the scripts folder, get help via the documentation, and run your Python script: 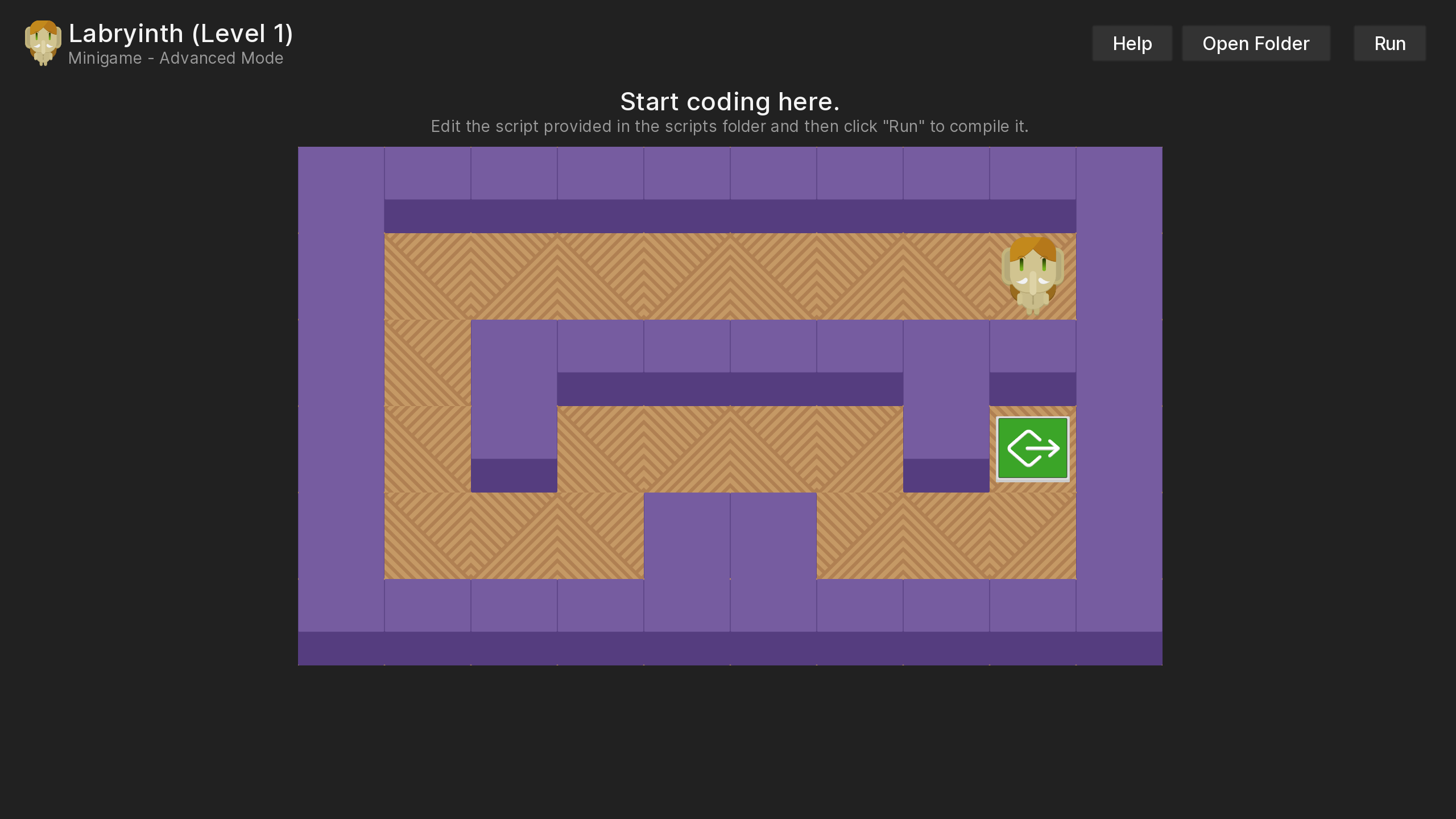 How do I write some code? 🛠

On the minigame screen, click “Open Folder” to open the Python scripts folder in the File Explorer on Windows, Finder on macOS, or your file browser of choice on Linux. 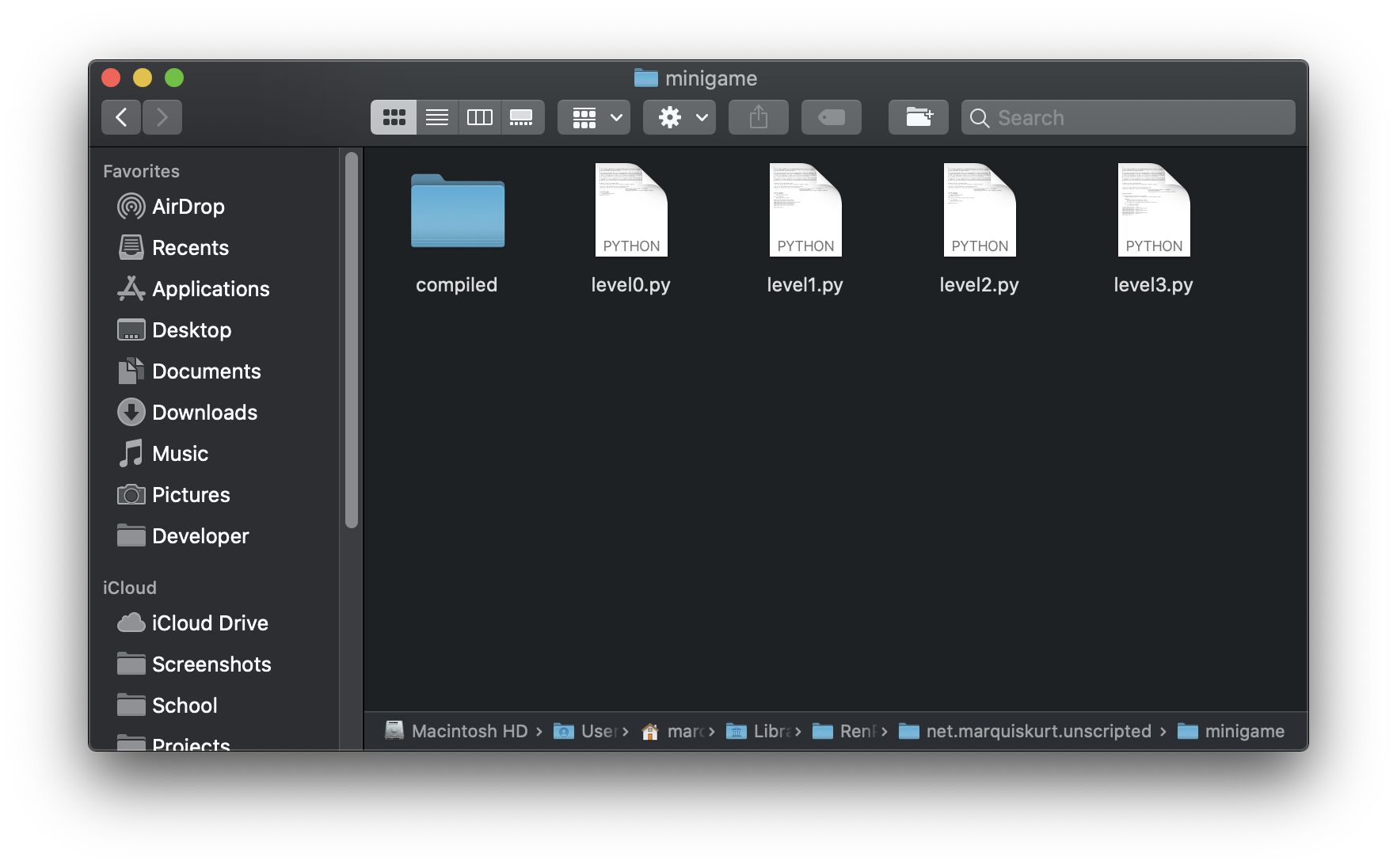 There will be several files for the minigame levels, each numbered by their level. The count starts at zero and increments by one for each level. If you’re unsure of what level you need to write a script for, check the title and level number of the current level you’re on in the minigame’s toolbar.

Each minigame level script comes preloaded with some template code to get you started. Namely, the game attempts to get the player’s information and the world from the minigame’s levels:

In most cases, you should probably not remove the code from these files; otherwise, you may run into some problems when trying to get your player to move!

Now let’s get into writing some code to solve the first puzzle! There are two main objects we can currently work with: game_player, which controls the player, and game_world, which controls the world. Most of the time, you’ll just need to work with the game_player object since you need to move the player and collect coins, but you can use game_world to determine things about the world that may help you.

In the first puzzle, we need to move Masti to the exit at the end of the corridor. In the basic mode, you would need to press “Move east” four times and then press “Exit map”. game_player has a function called move that moves the player a given direction that is supplied as a parameter. The exit function exits the map and also write the respective code for the minigame to read, so make sure that your scripts end with game_player.exit()! With this knowledge, we can write the following code to achieve the same effect as before:

Run it through the game, and keep experimenting with it to solve the puzzle.

Help! I’m stuck and my code’s not working 😫 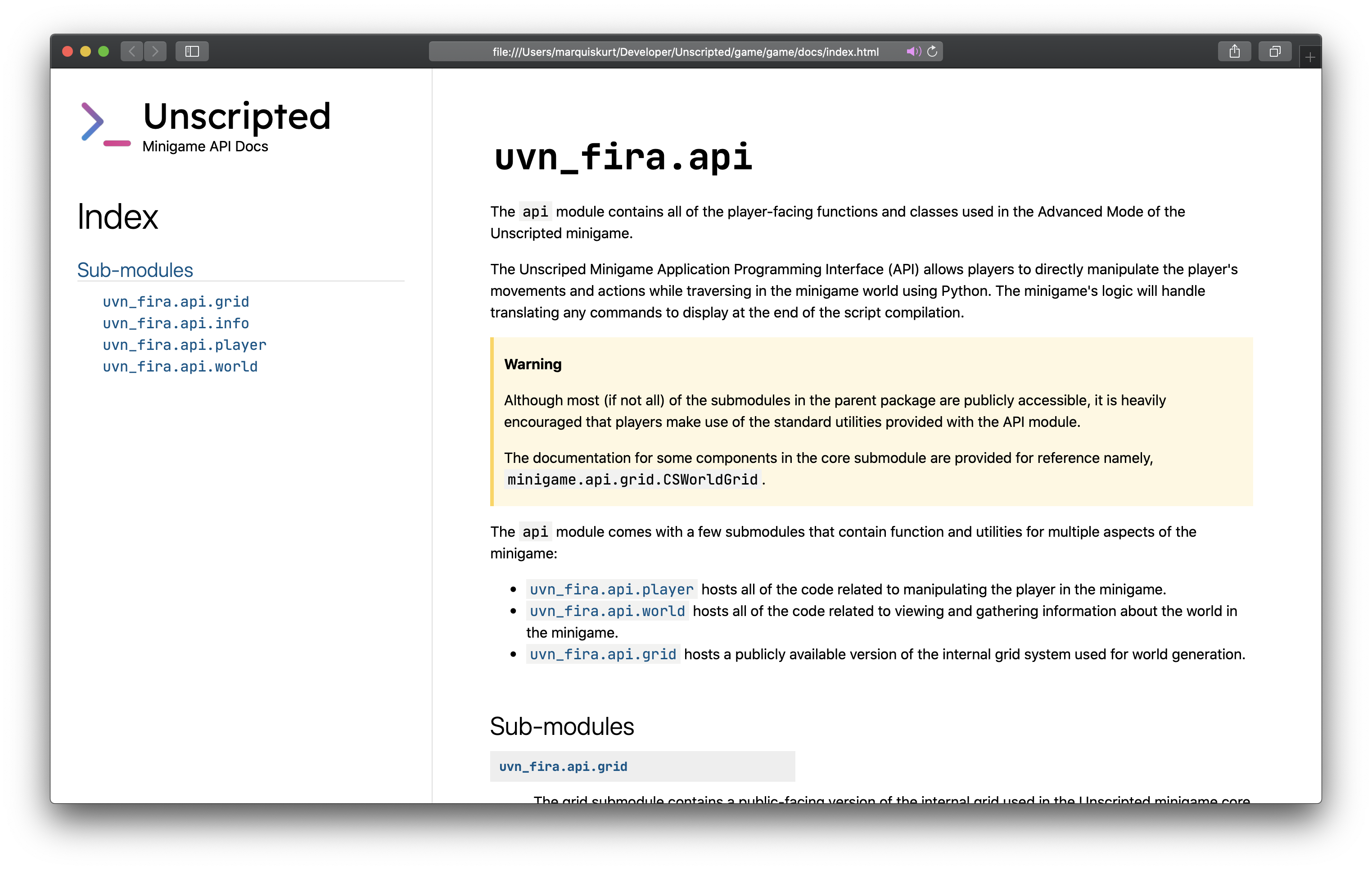 If you need some live help from fellow players or the development team, chat with us on Discord! We’d be more than happy to help you and look at your code. Here’s the invite link if you’re not in the server already: https://discord.gg/CXxnVhX. 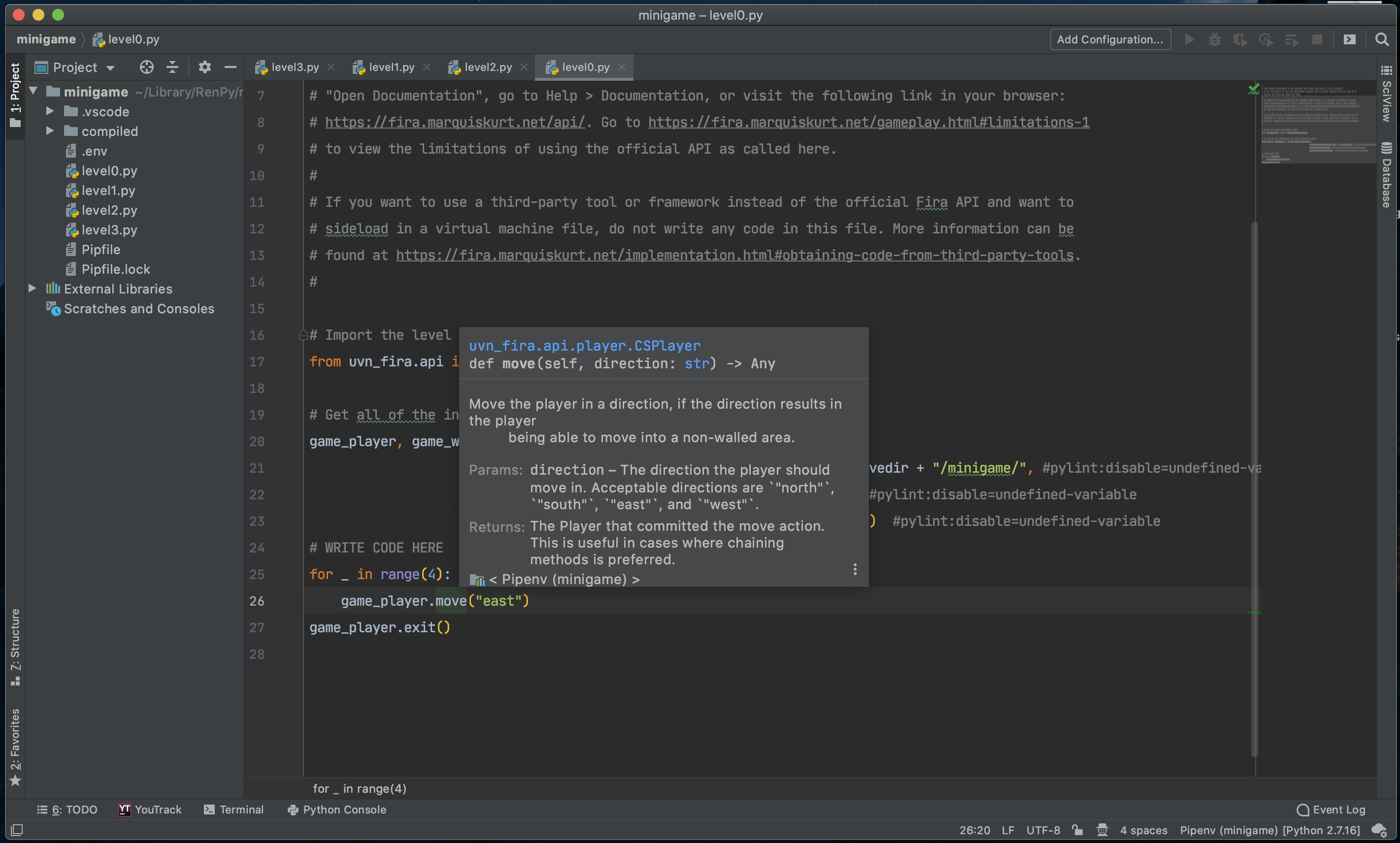 Now that you can write Python for the minigame, there are many ways that you can make the experience more comfortable for you as a developer! Here’s a great couple of notes to consider:

I hope you have fun playing around with what Python has to offer in the Advanced Mode of the minigame. Good luck; now go write some awesome Python code!

A visual novel about software development